A woman’s body is found in the remnants of a snow-hole dug on Ben Nevis. Naked, with an ice axe embedded in her skull, the cause of Ellie Saunder’s death is clear, only the murderer remains to be found. But inconsistences remain, and recently-appointed Detective Chief Inspector William Tosh is keen to solve the case.
Three men had been a major part of Ellie Saunder’s life: a structural engineer, a professional climber, and a third mysterious figure, John Serafini, a psychosexual counsellor. Serafini, it transpires, had a strong motive to see Ellie dead. His reluctance to come forward adds to the case against him.

Throughout the investigation DCI Tosh feels the rawness of his own failed relationship resurface as the life history of a woman climber who struggled with mental illness is laid bare. Can DCI Tosh solve the murder and find new love while wrestling with his and Ellie’s demons?

Ice Cold Blood is an absorbing and satisfying crime novel with twists and turns that leave the reader guessing until the end. Perfect for fans of sophisticated whodunnits who also appreciate books that addresses real-life issues.

There are no reviews yet.

Only logged in customers who have purchased this product may leave a review. 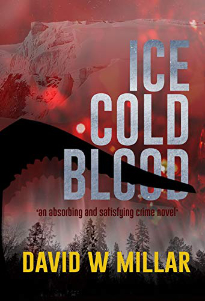 Order direct for FREE P&P to any UK address Dismiss